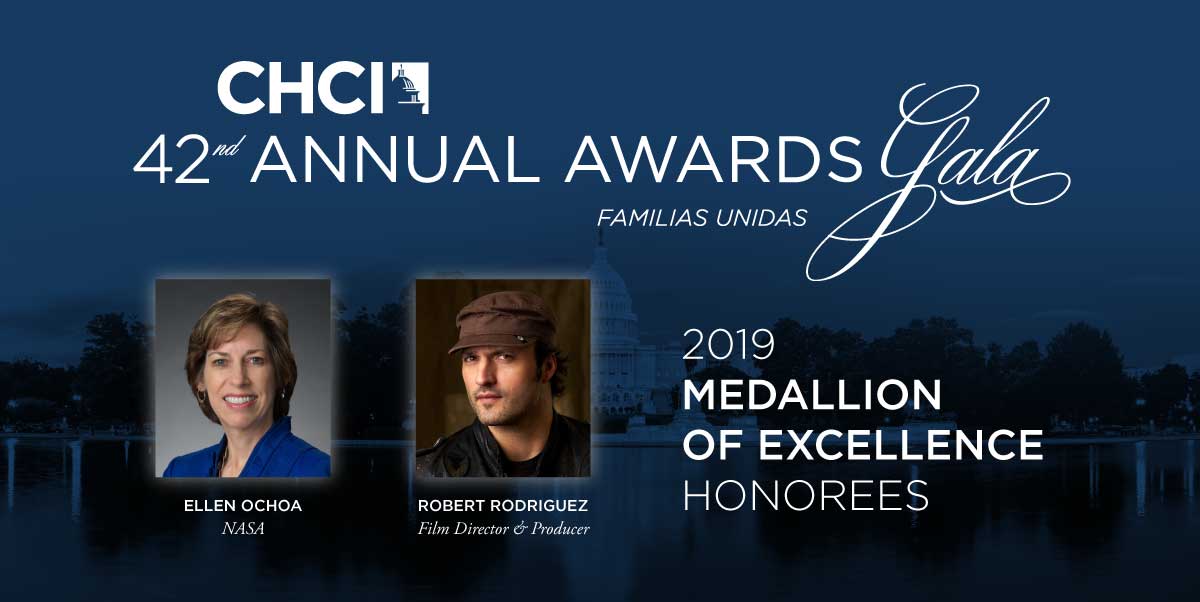 The Medallion of Excellence Award is CHCI’s highest accolade and one of the most prestigious honors in the Latino community bestowed annually upon individuals who are positive Hispanic American role models and whose extraordinary careers, civic leadership, and service contribute to the greater American society.

“One of the most celebrated visionaries in film and entertainment, Robert Rodriguez has redefined the industry with his boundless creativity, innovative storytelling, and constant strive for Latino representation,” said Rep. Gallego. “Similarly, as the first Hispanic woman to go to space and former director of the Johnson Space Center, Dr. Ellen Ochoa has paved the way for young Latinas and Latinos to follow their biggest aspirations. Both of these individuals, through their legacy of work and commitment to the Latino community, embody CHCI’s core principles and we are proud to celebrate and recognize them at our 42nd Annual Awards Gala this year.”

“We are proud to honor Robert Rodriguez and Dr. Ellen Ochoa for their dedication to equality, diversity, social justice, and embodiment of the American dream for all. We celebrate their visionary leadership and extraordinary careers that serve as catalysts for future generations to follow,” said Marco A. Davis, CHCI President and CEO.

The 2019 CHCI American Dream Medallion of Excellence in Education, Science, Medicine, or Civil Rights will be awarded to Dr. Ellen Ochoa.

For over 30 years, Dr. Ellen Ochoa has dedicated her life’s work to being a research engineer, astronaut and leader, making history and helping lay the foundation for students in STEM and higher education.

In 1993, Dr. Ochoa became the first Hispanic-American female astronaut and, in 2013, she became the second female and first Hispanic director of NASA’s Johnson Space Center. Ochoa has been recognized with numerous accolades including NASA’s highest award, the Distinguished Service Medal, the Presidential Distinguished Rank Award for senior executives in the federal government, and has six schools named for her. She serves on several boards, and chairs the Nomination Evaluation Committee for the National Medal of Technology and Innovation. She continues to support and advocate for the advancement of women and underrepresented minorities in professional, academic and civic spaces.

“I’m humbled by this recognition from the Congressional Hispanic Caucus Institute – it has been my privilege and pleasure, through being a part of the NASA team, to more broadly inspire women and the Hispanic community to reach for the stars,” said Dr. Ellen Ochoa.

The 2019 CHCI Medallion for Excellence in the Arts, Entertainment, Media, Music, and Sports will be awarded to Robert Rodriguez.

As a proud Mexican American, Robert Rodriguez has been transforming the scene of film and TV as a director, screenwriter, composer and editor with many of his films, shows, commercials and videos being shot in Texas and Mexico. He is considered one of the most visually driven and innovative storytellers of our time. Rodriguez is a film pioneer and technology trailblazer whose immeasurable talent can be seen in such projects as El Mariachi, Desperado, From Dusk Till Dawn, Spy Kids, Alita; Battle Angel, From Dusk till Dawn: The Series, not to mention a state-of-art virtual reality short, The Limit, starring Michelle Rodriguez. He has worked with Antonio Banderas, Salma Hayek and George Clooney, co-directed with Quentin Tarantino, and owns Troublemaker Studios, a film and media production company. Rodriguez is also the founder of El Rey Network, one of the ten minority networks launched by Comcast as a result of the merger with NBC Universal, and currently carried by AT&T DirecTV, Verizon, Spectrum and Cox. El Rey Network has been championed and supported by Latino advocates who believe more Latino-owned networks that give the community a strong positive voice and image are needed.

“I am honored and thrilled to receive such a prestigious award from the Congressional Hispanic Caucus Institute. I have always strived to open doors and bring more Latinos into film-making and entertainment, not only in front of, but behind the camera. I work to create and promote art that is an authentic representation of who we are as a culture. We are fast becoming a majority minority country, and I look forward to continue to tell the stories of the intricate and interesting multicultural communities that make up this great country,” said Robert Rodriguez.