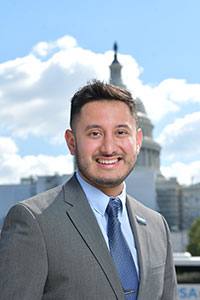 Aaron Armando Arriaga (he/him) is a Guatemalan American born and raised in Miami, FL. Aaron, a proud first-generation college graduate, received his bachelor’s degree in Political Science from the University of Florida in May 2022. Throughout his undergraduate and professional career, he has worked tirelessly to expand his knowledge of public policy and develop his ability to find common ground with others. Aaron developed an interest in political campaigns while he interned for the Florida Democratic Party during the 2018 Midterm elections. As a Campaign Fellow, he learned to appreciate the importance of grassroots mobilization and its effectiveness in advocating for social issues. This ultimately motivated him to serve in a wide variety of leadership positions at his college campus. These included serving as a UF Student Government Senator, President of the Central American Latin Organization, and Programming Director for his school’s First-Generation Leadership Program. Due to his success as a student leader and contributions in community service, Aaron was inducted into Florida Blue Key, the oldest and most prestigious leadership honorary in the entire State of Florida.

In 2021, Aaron was selected as 1 of 6 students nationally to be a Global Leader Fellow with the Congressional Hispanic Leadership Institute (CHLI). In this internship program, he was granted the opportunity to experience the legislative process from the vantage point of the public and private sectors. Aaron served as a Congressional Intern for Rep. Tom Malinowski (D-NJ) and gained an extensive appreciation for policy in foreign affairs and technology. Afterward, he worked as a Government Relations Intern for Accenture Federal Services (AFS), a government contracting firm dedicated to cybersecurity and IT modernization. After the completion of his program, Aaron continued his professional development by pursuing internships in government relations. He spent Spring 2022 interning at K&L Gates LLP and Summer 2022 at Invariant LLC, two of the most respected lobbying firms in the country.