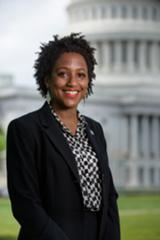 Abril is a first-generation Dominican American born in Manhattan, New York. Her parents moved to the United States when they were teenagers and Abril spent 10 years in Miami before relocating to Georgia during the economic recession of 2008. Raised by a single mother, Abril and her twin sister faced many economic hardships, but Abril’s mother never let them lose sight of the importance of earning an education.

After realizing she wanted to pursue a career in politics, Abril left home to study political science at the George Washington University. After interning with the Georgia Association of Latino Elected Officials, Abril interned at the League of United Latin American Citizens (LULAC) and for Excelencia in Education. Through her various internships, Abril has broadened her perspective of the political process and strengthened her understanding of the different ways to formulate effective policy.

As a CHCI Intern, Abril hopes to gain valuable insight into the legislative process. She looks forward to expanding her professional network and learning from former CHCI alumni. Abril hopes to one day work as a lobbyist or at a think tank in order to influence policy that can benefit Latinos and underserved communities.