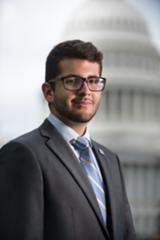 Adrian Orozco was born in Barranquilla, Colombia and came to Elizabeth, New Jersey with his family at the age of four. His family’s fight to obtain documented status during his childhood motivated him to be an advocate for others like him.

Adrian is currently pursuing a bachelor’s degree in political science at Seton Hall University. He hopes to pursue a Juris Doctorate and ultimately practice immigration law. His passion was made evident last summer when he served as a legal intern at the Catholic Charities of the Archdiocese of Newark, the same non-profit that aided his family’s case for political asylum. Adrian practices advocacy on campus as a member of the Latino Student Organization and as Vice President of Lambda Theta Phi Latin Fraternity’s Seton Hall chapter. In addition, Adrian is a member of his University’s Student Government Association, where he authored a resolution that called on the university’s administration to protect DACA recipients.

As a CHCI Intern, Adrian hopes to expand his knowledge of the political process, network with likeminded and motivated peers, and learn how to champion issues pertinent to the Latino community.