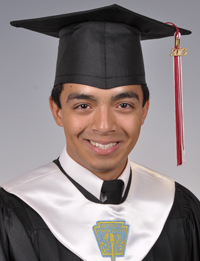 Howdy! My name is Aldo Sosa, an electrical engineering major from Dallas, Texas, but more importantly I am a loud and proud member of the Fightn’ Texas Aggie Class of 2017! My first semester in college just ended, and I am amazed at how much I have learned and grown during my time at Texas A&M University.

The classes I took during this past semester included the standard introductory engineering courses – calculus, physics, and introduction to engineering. Although all of these courses were difficult, they were also manageable and I was able to complete the semester with a GPA of 3.4. Yet as much as I learned academically, I feel the experience I have acquired outside the classroom is even greater.

About four weeks into school, I was invited to participate in an undergraduate research project under the department of nuclear engineering. The purpose of the project, named Zero Gravity Mass Inventory Gauge System (ZGMIGS), is to develop a system capable of measuring and locating liquids within containers in reduced gravity environments. The prototype we are developing to test this concept uses LED lights and photo-resistors in opposing sides of a transparent container, using the photo-resistors to detect fluctuations in lighting due to light being blocked by liquid within the container. Two weeks ago NASA replied to the proposal submitted to the Reduced Gravity Education Flight Program. It has been accepted and we have been given the opportunity to test our experiment in a microgravity environment aboard the Zero G aircraft in the summer of 2014.

More recently I became involved with a second engineering project by joining the Chem-E-Car competition team. The project consists of designing a small vehicle to travel a given distance, which is announced only moments before the competition. As the name implies, the majority of the team members are chemical engineering majors, and are in charge of constructing the battery and designing the timing mechanism. Yet students from other engineering disciplines, primarily mechanical and electrical, are also part of the team and are responsible for the construction of the vehicle itself and the design of the electrical circuitry controlling the vehicle.

Through these projects I have experienced firsthand the application of engineering concepts. During this last semester I have learned how to make a blog, program in C++, program a microcontroller, and have gained experience in project management. Both of these will continue into the spring semester, and I am excited of what is to come.

On a different note, I see my time in college as a chance to try those things I always wanted to do but just never quite got around to. I am learning how to play the guitar and piano, and am considering getting a piloting license while in college. I have also become much closer with church, I have made many friends there and will be helping at a retreat during next fall. I believe I have grown during my time in college thus far, and am looking forward to the remaining three years.