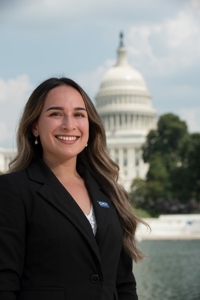 Alejandra Garcia is a proud daughter of hard-working parents who immigrated to the United States from Jalisco, Mexico. Growing up in California, Alejandra saw the struggles her parents faced due to financial difficulties, language barriers, and being a minority in America. Her parents’ endless sacrifice to make a living in this nation and provide for her and her siblings drives her to pursue higher education and make positive change in the world.

Alejandra is a student at California State University, Sacramento, majoring in Political Science and minoring in Communications. She has been a member of Define American, Pi Sigma Alpha, and Phi Sigma Sigma’s Executive Board as Bursar for the organization. Alejandra participated in the Sacramento Semester Program, interning at the California State Capitol for Assemblywoman Lorena Gonzalez Fletcher where she helped advance legislation by reaching out to stakeholders, obtain support letters for bills, draft talking points, editing fact sheets, and gathering background info regarding education, local control, and immigration policy.

Alejandra’s interest in immigration extends comes from her time on the Student Advisory Board for Congresswoman Zoe Lofgren as she drafted a legislative proposal on immigration reform. Her passion on immigration deepened through her work as a legal assistant at an immigration law firm, where her fluency in Spanish helped her assist staff attorneys file applications for clients. Her family’s personal story and experience helping others adjust their status sparked her interested to become an immigration attorney. She has a vision and plans to run for Santa Clara County Board of Supervisors in the future.  She has worked for Dave Cortese, Santa Clara County Supervisor, and was the lead project manager in creating care packages for children whose parent were held in detention centers or had been deported.

Alejandra plans to attend law school to earn a dual Juris Doctor/master’s degree in hopes to one day becoming Director of United States Citizenship and Immigration Services. As a Congressional Hispanic Caucus Institute intern, Alejandra aims to develop skills to better serve the Hispanic community, learn how the House and Senate compromise on controversial issues, and network with professional leaders.