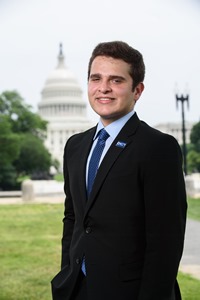 Alexander Gonzalez-Torres was born and raised in Morovis, Puerto Rico and is currently majoring in both Political Science and Hispanic Studies at Columbia University in the City of New York.

Moved by the Puerto Rican struggle for political equality, Alexander became involved at age 16 in grassroots movements on the island that seek to incorporate Puerto Rico into the American Union, to give residents of Puerto Rico the right to vote for the President, and to grant the Commonwealth of Puerto Rico fair representation in Congress. These efforts have since led Alexander to Capitol Hill in lobbying efforts, to the United Nations in a plea for equality, and everywhere in between.

At Columbia University, Alexander has served on the Executive Board of the Columbia Democrats, an organization which he led in lobbying efforts for immigration reform and in canvassing efforts for minority candidates beyond New York City. Currently, he leads Columbia Against the Militarization of Police, a working group producing legislation to improve police-citizen relationships in the Big Apple.

Alexander aspires to enroll in law school in the near future and to become a civil rights lawyer with an eye on public service. As CHCI intern, Alexander hopes to expand his network of young Latino leaders and to gain an insider’s look of the legislative process to better advocate for the causes he is passionate about.