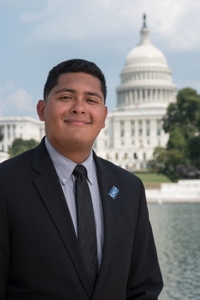 Alexander Molina’s motivation and passion to serve stem directly from to his family’s experiences. His mother comes from El Salvador, where at the age of sixteen she was forced to leave her home to avoid being engulfed in the violence and suffering of the El Salvadorian Civil War. His father comes from Los Angeles and of Mexican descent. His father’s struggles have inspired him to fight for what is right in this world. His parent’s hard work motivates Alexander and is the reason he feels obligated to serve and help pay back the risks his mother took, and the work his father’s done for them to prosper in this country.

Alexander is currently attending Texas State University studying Political Science and Spanish as a double major.  A highlight of his college career has been serving on multiple executive boards for multicultural and service organizations, as well as serving within the Student Government for the past three years. As a freshman, he served as Historian for his class. He then proceeded on to win an election to become Senator At Large, a role which empowered him to write legislation focused on enhancing services and helping underrepresented students, such as bringing in an immigration attorney to help immigrant communities on campus.

In the future, Alexander plans to serve as mentor to young Latinos and make a difference where he can, whether it be in the public or non-profit sector. As a CHCI intern he hopes to learn firsthand government processes and wants to bring back what he learned in DC to his school community and local community members.