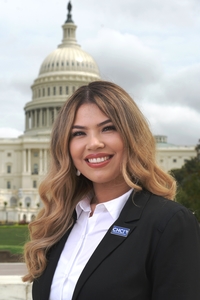 Alexia Iman Burquez was born and raised in the low-income communities of Lynwood and Compton, California. She is a first-generation Mexican American college graduate who is proud of her heritage and is committed to advancing the Latinx community. Alexia’s early exposure to the realities of living in low-income communities – drugs, violence, poverty, lack of access to vital resources – fueled her passion to advocate for other underrepresented individuals. Alexia’s longing to escape instability at home led her to become an excellent and diligent student throughout her academic career. Alexia continued her academic journey at the University of California, Irvine where she received a Bachelor of Arts with a dual major in political science and international studies. Her education and real world experience dealing with poverty, immigration, and criminal justice systems inspired her to pursue a career committed to deconstructing institutional barriers for underprivileged people and providing access to historically under-resourced communities.

As a first-generation, low-income college student, Alexia experienced first-hand the many barriers to accessing a quality higher education. The difficulties she faced growing up and while attending college motivated her to become involved in extracurricular activities related to  civic engagement,  education advocacy, and criminal justice reform efforts. As a Public Policy and International Affairs (PPIA) Law Fellow, Alexia engaged in rigorous policy-related coursework where she researched different strategies to effectively and ethically eliminate mass incarceration. Alexia also championed workers’ rights and economic equity through her roles as a Trabajadora Fellow and a United States Hispanic Chamber of Commerce (USHCC) Business Development Fellow, where she participated in Latina Equal Pay Day initiatives to promote economic prosperity in the Latinx community.

During her time with CHCI, Alexia hopes to learn more about the democratic process and how she can leverage her role as a fellow to foster transformative change in government and politics. Additionally, she also hopes to learn more about creating pathways to access for marginalized people in the traditionally exclusive realms of law, policy, technology, and government as a means of establishing a more inclusive workforce. To combat poverty and its implications, Alexia also hopes to fund initiatives that will help the Latinx community establish sustainable avenues for generating intergenerational wealth.