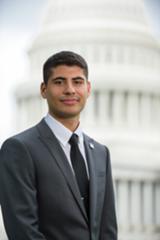 Alexis Lugo, born in the small and diverse border town of Douglas in Southeast Arizona, is a first-generation Mexican-American. When he was eight years old, his parents uprooted their lives in Mexico and took a leap of faith by moving to the United States. His parents have been the major driving force in his life and are the reason he pursued higher education, becoming a diligent and involved student. Their courage in the face of adversity has shaped him into a resilient and open-minded individual.

Alexis is currently double majoring in business management and entrepreneurship at the Eller College of Management located within the University of Arizona. Alexis volunteers at the Humane Society of Southern Arizona and is a member of the Eller Hispanic Honorary where he is involved in the college’s Hispanic community and helps with local community events. He has also participated in the Hispanic Scholarship Fund’s Youth Leadership Institute where he mentored a group of junior high school students about the transition from high school to college and applying to top tier universities.

As a CHCI Intern, Alexis hopes to gain first-hand experience about the day-to-day operations at an accomplished congressional office and hopes to expand his network. With the professional development he will garner, he will have the tools to become a more active political member, locally and nationally. In the future, Alexis hopes to build a business dedicated to helping disadvantaged people in the Latino community.