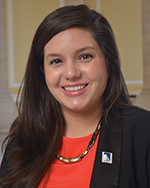 Anabel Maldonado is first-generation Mexican born in Phoenix, where she finished her B.A. in political science at Arizona State University (ASU) in 2013.

Her education at ASU and her close proximity to the border made her aware of a much larger human rights crisis at a young age. As an undergraduate student, Anabel’s work near the Arizona-Mexico border led her to conduct comparative research on borders around the world. Immediately after graduating, she joined the American University in Cairo as a research assistant, which opened her eyes to an even larger international migration crisis. Since her time in Egypt, Anabel has become a powerful voice in Arizona, where she has advocated for workers’ rights, equal wages, and a civic-minded community as an organizer for a grassroots organization.

As a CHCI Public Policy Fellow, Anabel hopes to learn and maneuver through bureaucracies in order to be the strong voice her community needs.