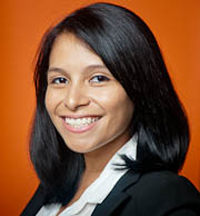 Andrea’s past experiences have made her into the student, daughter, and person she is today. She was born in Brooklyn, New York, to immigrant parents from Honduras who were unable to get a sufficient education in their native land. Fortunately, she was encouraged to hunger for a life in which a remarkable education is the North Star that leads to a notable career. From a young age, her mother instilled within her heart the idea that she would move mountains one day. Her mother would remind her that with an education, her dreams could become something more. As Andrea grew older, she enjoyed learning new things and adventuring out into the world, while always keeping in mind her mother’s words. Twenty-one years later, Andrea’s mother still remains her sheer motivation, as she has taught her how to be independent and persistent—both valuable qualities and traits necessary to succeed.

Now as a senior at New York University, Andrea has realized that her dream is to advocate for underserved families—those who, because of language and socioeconomic barriers, face difficulties in the legal justice system. Andrea is pursuing a Bachelor’s degree in Sociology and upon completing her freshman year she was accepted into the New York Needs You Fellowship Program tailored for high-achieving, first-generation college students. This program has provided her with the blueprint for success, which includes guidance, support and opportunities. Andrea is also active in her community and currently serves as a bilingual advocate at Health Leads in the predominantly Latino community of Bushwick, Brooklyn. Through her work at Health Leads, Andrea has assisted families in preventing crises and has served as a liaison between government and community resources.

Andrea also has a passion for education and hopes to one day establish a non-profit whose purpose is to generate educational initiatives that tackle language and social barriers. She wants to create a culturally sensitive curriculum so that every child can exercise their right to education and can take full advantage of it. To further explore this interest, Andrea has also participated in two Alternative Breaks Service Trips, one to Los Angeles, California to explore and combat the School to Prison pipeline and another to Shanghai, China to provide English instruction to children of migrant workers.

Upon graduating from NYU, Andrea intends to pursue a Juris Doctorate specializing in Public Interest Law. One may ask her, “Why study law?” Andrea explains that growing up witnessing members of her community become victims of domestic violence gave her a thirst for justice. As a Latina lawyer, she wants to bridge the gap between the American legal system and underrepresented communities by ensuring that the rights of the people are protected. Andrea has a passion to assist her community, especially those who suffer from domestic violence and are encountering the legal system. She wants to create institutional avenues that will take the language, socioeconomic and cultural aspects of the Latino community into consideration.

In her pursuit towards accomplishing her dreams, Andrea is thankful for the opportunity to be a CHCI Scholar. Andrea believes that as a CHCI Scholar actively involved with her school and her community, she has the responsibility and commitment to give back and pursue a career in law, advocacy and education.