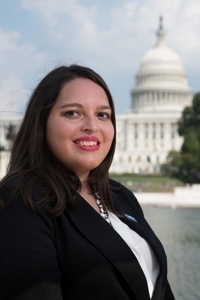 Andrea is a local San Antonio Student pursuing her bachelor’s degree in Public Administration at the University of Texas at San Antonio. Born and raised in Mexico City, Mexico, she moved to the US with her parents at the age of eight. Andrea grew up undocumented, going to public schools in the San Antonio Area. As a high school student, attending college wasn’t guaranteed yet she still pushed for academic excellence. During her Junior year of High School, DACA was implemented and in 2014, Andrea graduated with Honors from Churchill High School, receiving a full ride to Texas State University.

Andrea attended Texas State University for two years as a Nursing Major and a member of the Honors College, before transferring to UTSA. Once there, Andrea saw the complexities of student life and civic involvement, which inspired her to switch majors to a Public Policy Perspective. As an undocumented student facing many adversities, Andrea got involved with Immigrant Youth Leadership, a student grassroots immigrant rights advocacy group. Under IYL, Andrea found her voice advocating for undocumented students in San Antonio, eventually leading the organization. She also was a San Antonio Student Ambassador, working under P16Plus of Bexar County for educational equity for all K-12 students. She then became the first immigration Fellow for MOVE TX, a non-partisan nonprofit focused on youth civic advocacy.

Not long after becoming the coordinator of Immigrant Youth Leadership, Andrea and other fellow undocumented students advocated for the creation of an onsite Dreamer Resource Center to help undocumented students reach educational success at UTSA. Following the models of other Dreamer Centers around the country, Andrea wrote the proposal for such a center, and with the help and further involvement of other students and faculty, UTSA became the first university in Texas to have a Dreamer Resource Center. This success drove Andrea to push for more institutional and local policies which would ensure security for immigrant communities in San Antonio.

These efforts have led Andrea to Washington D.C in various occasions as an advocate for immigrant rights. Through her shared experiences, Andrea hopes to pursue a job in the policy sector, to push for educational equity and the rights of marginalized communities around the country.