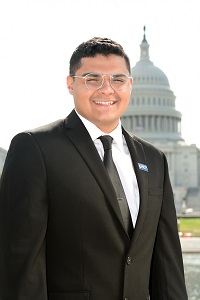 Andres was born and raised on the north side of Chicago by his parents who both immigrated to the United States from México. He is currently a junior at Northwestern University studying journalism and Latino/a studies with a minor in marketing. Prior to attending Northwestern, Andres spent his first year at St. Olaf College as a Posse scholar. On campus, he has worked as a reporter and editor on a wide variety of campus publications including his college newspaper, magazine and Latinx-interest magazine. Early this year, his work was published on NPR’s Latino USA for an article he wrote on the new generation of Latinx musical artist in Chicago. Last summer, he had the privilege of interning for the vice mayor of Chicago, where he worked on a wide variety of projects including constituent services, business affairs and zoning issues. Upon completing his degree at Northwestern, Andres hopes to become a journalist covering the intersection of race, politics and culture in the United States.

As a CHCI intern, he hopes to strengthen his understanding of policy issues and the legislative process. He hopes to use this experience to better prepare him for future.