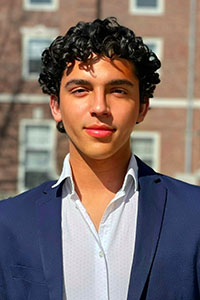 Born in Venezuela, Andrés and his family immigrated to Miami, when he was nearly two years old. Having grown up in the culturally rich Latinx communities of South Florida, Andrés gradually became passionate in understanding the several complex and nuanced issues these communities were forced to confront as complicit in creating. It is through the things he saw, heard, and experienced that he learned the imperativeness of amplifying marginalized and erased voices and perspectives.

Andrés is a part of Harvard University’s Class of 2023, where he studies Environmental Science & Public Policy and Social Anthropology along with pursuing a minor in Ethnicity, Migration & Rights. Being a co-president for Harvard Undergraduates for Environmental Justice, he aspires to lead and support the mobilization of grassroots efforts to address the intersection between environmental and social issues. It is Andrés’ goal to find a career as a research and activist to further elevate intersectional environmentalism and environmental justice.

As a CHCI Intern, Andrés hopes to better understand the systems, dynamics, and relationships that the United States government engages to enact policy. Ultimately, Andrés hopes this opportunity will provide him with a toolkit for change as he thinks and works through a system thinking framework.