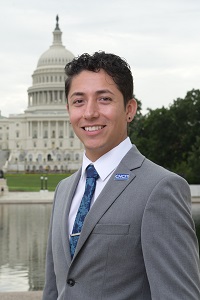 Angel was born in Long Beach, California and raised in the neighboring city of Hawaiian Gardens by his mother and father whom migrated to California from Michoacán and San Luis Potosi, México. Angel is the oldest of three children and learned early on about the importance of being responsible, being a role model, and about family. He later became the first in his family to attend college where he strengthened his voice and passion to fight against any form of injustice.

Angel now attends the University of California, Santa Barbara where he will be receiving his B.A. in Sociology with minors in History and LGBTQ Studies in Fall of 2019. Angel achieved the Dean’s Honors List and became the Office Manager of the UC Santa Barbara Resource Center for Sexual and Gender Diversity (RCSGD). Through his involvement with the LGBTQ community, Angel established the RCSGD Queers in the Outdoors Program and held the undergraduate student position in the 2018 RCSGD Director Hiring Committee. Upon receiving his B.A., Angel plans to continue his education to receive a J.D. and M.A. degree in Public Policy. He strives to achieve his career goal of working for the American Civil Liberties Union (ACLU) where he will continue his fight against any form of injustice.

As a CHCI Intern, Angel hopes to expand his knowledge and gain experience in the federal legislative process and judicial system while making meaningful connections.