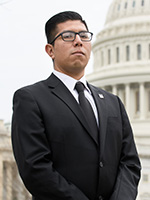 Angel Silva was born in Mexico City, Mexico and moved to Los Angeles, California when he was only a year old. Angel’s hardworking parents motivated him to excel in his education, which led him to pursue a major in journalism and a minor in political science at California State University, Northridge (CSUN). Angel hopes to set an example for his two younger siblings, and emphasize the importance of higher education as an integral step toward success.

Angel has remained active on campus through his involvement with the university’s Model United Nations team, by working as a writer for CSUN’s news organization, the Sundial, and as radio host for the publication’s news broadcast. Additionally, Angel helped create the DREAM Center, a resource center for undocumented students, which launched in 2015. At the DREAM Center, he served as a peer mentor and as the center’s policy coordinator, working with students to ensure their educational success and strengthen their understanding of programs and legislation affecting them at the university, state and federal level.

Angel was a UCLA Dream Summer intern in the summer of 2015, where he worked on educational issues affecting undocumented and minority populations across the United States. During the fall semester of 2016 semester, Angel was one of the first two DACA students accepted to CSUN’s Campus-Based Exchange Program, and had the opportunity to study international relations and global politics at the University of Limerick in Ireland.

As a CHCI Intern, Angel hopes to strengthen his legislative knowledge in order to better advocate for his community at the state and national level. In the future, he hopes to attend law school and pursue a career as a California state legislator.