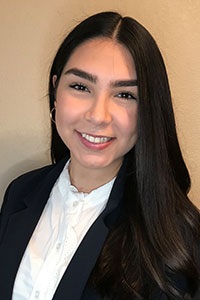 Angela was raised in the small border town of Mission, Texas. She grew up surrounded by the rich Mexican culture that is cultivated along the Rio Grande River. As a daughter of immigrants, Angela is one of the first in her family to receive a college education. She is currently a senior at St. Mary’s University in San Antonio, TX majoring in Political Science.

Throughout her college courses, Angela quickly identified disparities in her hometown that led her to pursue research through the McNair Scholars Program. Her research focuses on colonias in the Rio Grande Valley and the disparities that exist in infrastructure and education throughout the region. Angela is also a prominent member of her sorority, Alpha Phi, and the President’s Ambassadors program where she dedicates time to raising awareness for Women’s Heart Health and serving the greater St. Mary’s community of the West Side. Upon completing her undergraduate degree, Angela hopes to obtain her doctoral degree in public policy with a focus on the Latinx community. Ultimately, her career goal would be working in academia as a professor, however, along the way she hopes to work for a non-profit organization growing her research on disparities in low-socioeconomic communities.

As a CHCI Intern, Angela hopes to expand her knowledge of the development and implementation of legislation and policy. She hopes to further develop her analytical and networking skills to discover new avenues that influence and produce positive change in her community.