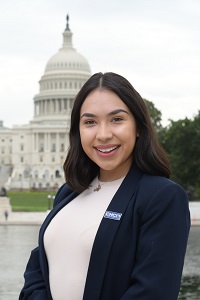 Angélica was born in California and raised in Mexico City with her mom and sister. They would later move to Arizona to seek a better life and educational opportunities. Growing up in a mixed-status family during the enactment of S.B. 1070 in Arizona, and witnessing her mom go through deportation proceedings shaped her propensity for immigration policy. Angélica is a first-generation student at Arizona State University. She is studying Political Science and Transborder Studies with a concentration in U.S./Mexico Regional Immigration Policy and Economics, and a certificate in Civic Education.

During her time as an undergraduate, Angélica founded Aliento ASU, served as director of events for the Pre-Law Society, chaired ASU’s  campus-wide community service committee, and was a national competitor for policy debate.  Angélica’s academic achievements and commitment to the community have earned her university-wide recognition as a recipient of ASU’s School of Politics and Global Studies Director’s Award, College of Liberal Arts and Sciences Student Leader Award, and the President’s Volunteer Service Award.

Upon graduation, Angélica hopes to obtain a master’s degree in public policy and a J.D.  Her ultimate career goal is to continue serving alongside Latinx community leaders through immigration advocacy in her home state, and by eventually running for office. As a CHCI intern, Angélica hopes to build her knowledge of public policy and the legislative process to better inform her long-term work as an advocate and organizer.