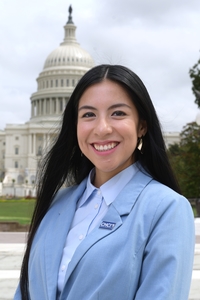 Antoinette was born and raised in Houston, Texas. She is the daughter of a Vietnamese immigrant and a first-generation Mexican American, a combination that emphasized the importance of racial diversity and cultural acceptance. Her family’s experiences with the Texas Department of Criminal Justice and U.S. Immigration and Customs Enforcement shaped her interest in political advocacy on behalf of minorities and immigrants.

Antoinette began working in politics through an internship at a government relations firm. Within a year, she assumed the role of policy director, managing legislative agendas for nine of the largest Texas urban school districts (TUC), the largest Texas law enforcement association comprised of more than 29,000 members (TMPA), and the largest organization of elected Texas county officials (JPCA). She worked for the firm while simultaneously pursuing a Bachelor of Arts in government at the University of Texas at Austin (UT Austin).

At UT Austin, she served as a student government representative on the UT Police Department Oversight Committee. She served as a research assistant in the UT College of Education, working on the Arizona School Choice Project. In addition, she was a J.J. Pickle Fellow in the UT Department of Government, which allowed her to conduct and present her own research on the legislative agendas of female congressional lawmakers. Furthermore, she conducted research on Santeria in Havana, Cuba on a UT-sponsored scholarship and studied social entrepreneurship in Beijing, China as a Fund for Education Abroad scholar. Her bicultural background motivates her interest in international affairs and U.S., foreign relations.

Off campus, she actively volunteered with two immigrant advocacy organizations: Grassroots Leadership, visiting and offering case oversight to detained female asylees; and Posada Esperanza, accompanying and translating for released female asylees and their children during medical and insurance appointments. She also volunteered with the Girls Empowerment Network, mentoring and engaging young girls in career day activities and small-group discussions that encouraged girl’s empowerment and bonding.

As a Vietnamese-Mexican-American, former public housing and welfare recipient, teen runaway, and reformed juvenile offender, Antoinette is passionate about supporting and advocating for the communities she grew up in. As a CHCI Public Policy Fellow, she wants to deepen her understanding of the legislative process and work on policy that improves access to education, housing, and financial services for minority and immigrant communities. After her fellowship, she plans to attend law school and remain active in her community and the political field.