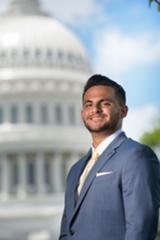 Antonio Barroso was born and raised in Hialeah, Florida and is the proud son of Cuban immigrants. Antonio is the first in his family to attend college and strives to be the catalyst of change and the leader his parents have always guided him to be. Growing up, Antonio experienced first-hand what it is like to live in a town of immigrants who came to this country seeking political freedom and a better life.

Antonio will soon graduate with a degree in political science from Florida Gulf Coast University (FGCU). He hopes to pursue a career in immigration law and form a non-profit organization that caters to the needs of Cuban refugees. As a full-time student who also works full-time as a real estate agent, Antonio learned that anything is possible and that honesty and integrity will get you a long way. At FGCU, he served as president of The Latin American Student Organization, which creates awareness and promotes Hispanic culture. Antonio was also the founding president of The FGCU Voto Latino Campus Chapter, which is a civic media organization that transforms America by recognizing Latinos’ innate leadership.

As a CHCI Intern, Antonio hopes to concentrate on building relationships with fellow interns who share the same passion of helping others. He intends to learn how to network and communicate in the political arena. He looks