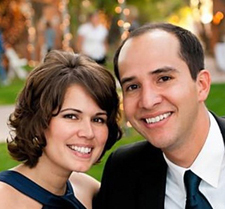 Mimi moved to New Mexico in 2006 upon completing her Master in Public Policy at Harvard University’s John F. Kennedy School of Government to help Antonio run for the New Mexico House of Representatives. Prior to Mimi’s current employment with the New Mexico Legislative Finance Committee, she was an AmeriCorps volunteer, a mayoral fellow with the City of Chicago, a policy analyst for the Albuquerque City Council, and the campaign manager for U.S. Congresswoman Michelle Lujan Grisham’s successful county commission race in 2010.

After his internship with U.S. Senator Tom Daschle, Antonio received a B.A. from Colorado College, was the central Florida organizer for Mi Familia Vota during the 2004 election cycle, and became the director of business development for Keystone International, Inc. Antonio, unsuccessful in his run for elected office, started a graduate program at the University of New Mexico in 2007 while working as a staffer for U.S. Representative Martin Heinrich (NM-01). Antonio also served as Congressman Heinrich’s campaign political director in 2010. After three years of service to the Congressman, Antonio set out to start his own business – Apollon, LLC. Antonio’s main client, Technology Ventures Corporation, focuses on the commercialization of federal research and development at the Department of Energy, particularly at Sandia National Laboratories.

In the fall of 2009, Antonio and Mimi married in a historic mission church built by Antonio’s great grandfather in Abeytas, NM.

2. What impact did your CHCI experience have on your careers and development as leaders?

For both of them, CHCI provided the first real exposure to the broad spectrum that makes up the Latino Community and the issues that impact all of us as Latinos. For Antonio, growing up in NM, he had only been exposed to the Mexican/New Mexican experience. For Mimi, having excelled in mainly Caucasian schools, she did not have privilege to work alongside many Hispanics. The CHCI experience exposed both of them to the richness of the greater Hispanic community and the challenges and opportunities that come with being Hispanic. Alongside culturally like-minded individuals, Antonio and Mimi grew in their understanding of larger societal issues and in their understanding that as leaders they must always work to better the lives of Hispanics through public policy. “We are blessed to be part of a family of future leaders and embrace the responsibility associated with having had the CHCI experience.” ~ Antonio and Mimi

3. How do you manage family, careers and community service?

Luz en la casa, luz en la calle. We believe all must be right with us at home for all to be right in our public lives. Priority setting, strong communication, approaching life as a team, and prayer are the elements that allow us to manage our careers and strengthen our marriage. We have learned that we must make career decisions together and be supportive of each other’s careers. Life gets super busy, however when you are clear about your priorities and communicate your needs to one another – there is always “luz” at home.