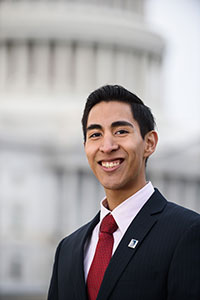 Antonio Hernandez was born in Houston, Texas, but grew up in the border city of Reynosa, Tamaulipas, Mexico. He had transitioned back to the United States with his mother when he was 16 years old. She struggled to find employment due to language barriers and Antonio’s high school didn’t recognize some credits from Mexico pushing him back a year. He persevered and stayed after school to re-earn credits and took Advanced Placement and college courses. His hard work paid off when he became a Hispanic Scholarship Fund-Gates Millennium Scholar and the first in his family to enroll in an American university.

Antonio attends the University of Texas at Austin, pursuing two bachelor degrees-one in Government and one in Rhetoric & Writing-in the College of Liberal Arts Honors. A driving factor in his life is helping others facing similar struggles as he was, including navigating school and coming to terms with one’s sexuality. He worked at his university’s writing center, tutoring English Language Learner students and others to become better writers. He also mentored incoming First Generation students to find their place on campus and succeed.

As a CHCI intern, Antonio plans to gain more experience in the legislative process, hone his leadership skills, and bring awareness to areas of intersection between the LGBTQ+ and the Latino community. In the future, he plans to pursue a career in public service or law, focusing on human and civil rights.