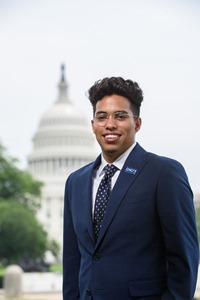 Ariel Flores Mena was born in Mexico City and has lived Utah for the past 9 years after immigrating with his mother and his twin for a better future. He is going into his fourth year and will receive an honors degree in Business Management with a minor in Ethnic Studies.

During his first year, Ariel was a part of Diversity Scholars Program where he and his peers were pushed to critically analyze social issues and inequalities through a Critical Race Theory lens. This program sparked Ariel’s interest in social justice and inspired him to become more engaged and committed to his community.

Ariel is currently Co-Chair of the Movimiento Estudiantil Chicanx de Azlan (M.E.Ch.A) student group, and serves as one of the seven appointed Supreme Court Justices for the U of U’s student body government, Associated Students of the University of Utah (ASUU). He is an active member of the Black Student Union and SOMOS Dreamers, an organization that advocates for undocumented students on campus. He has also served as part of the Presidential Search Committee, the U of U’s Anti-Racism Task Force, and a part of the 2018 Commencement Speech Selection Committee.

Ariel’s passion for social justice and activism has forged his plans for the future. He plans on attending law school after receiving his B.S. to build a career fighting and advocating for marginalized communities. He hopes to one day become a senator and represent his community. As a Congressional Hispanic Caucus Institute intern, Ariel hopes to further understand the complexity in governmental and the legislative process. He wants to create systems of support for marginalized communities in this country.  He seeks to serve as a voice for those who are often left voiceless.