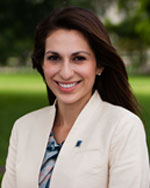 Aurelia De La Rosa Aceves is a Mexican-American, raised in Alhambra, California, a suburb of Los Angeles County. She received a Bachelor of Science degree in sociology and minor in ethnic studies from Santa Clara University in 2008. She completed her Master’s degree in sociology at Arizona State University in 2011 and went on to receive a second master’s in public administration from CUNY-Bernard M. Baruch College, School of Public Affairs in July 2012.

Aurelia served as a member of the 2012 cohort of the National Urban Fellows program. As part of the fellowship, Aurelia worked at Community Catalyst, a national consumer health advocacy organization based in Boston. She designed and conducted an assessment to identify effective strategies to engage communities of color in the policy implementation of the Affordable Care Act. The assessment culminated in the report Advancing Health Reform by Inclusion: Engaging Communities of Color in Creating Policy Change.

As the Health Graduate Fellow, Aurelia seeks to build on her skills and experiences to gain a better understanding of how to effectively integrate Latino and other underserved communities into the federal health policymaking process.