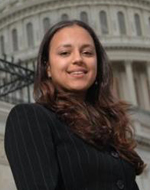 The Congressional Hispanics Caucus Institute (CHCI) honors Betsaida Alcantara as the April 2007 Fellow of the Month. During her placement in the office of Senator Charles Schumer (NY), Betsaida conducted policy research ranging from HIV/AIDS prevention in Federal prisons to immigration reform. She developed a comprehensive immigration reform referral package and co-wrote a speech on juvenile justice reform in New York City.

Currently, Betsaida is working in the office of Senator Robert Menendez (NJ). In this capacity, she has been disseminating the Latino Leadership Link, a resource tool for Senate staffers that includes a press release and issue brief to update Senators on how major policy issues of the day impact the Latino community. She is also assisting the Senate staff with the Democratic Hispanic Task Force, Co-chaired by Senator Robert Menendez and Senator Ken Salazar. Her responsibilities include: tracking Hispanic news and compiling bi-weekly clips, assisting with event organizing, writing memos and floor speeches for the Senator.

Betsaida has been fortunate to have a diversity of both professional and academic experiences. Prior to the fellowship, she worked with the New America Alliance, a group of Latino business leaders that want to create pathways to wealth-building for the Latino community. She was also a legal research assistant with the Workers’ Rights Law Center, an organization that provides free legal assistance to farm workers, day laborers and immigrant workers in the Hudson Valley of New York.

Her varied experiences also include monitoring elections in Guatemala, studying post-communist transitions to democracy in Hungary, being on a delegation to Mexico to see first-hand the effects of NAFTA on ‘maquila’ workers and co-founding the Youth Arts Group, an ongoing leadership development program for rural and migrant youth.

Most of Betsaida’s work experience has been for the empowerment of underrepresented groups in the United States. She hopes to continue to find ways to combine her public sector experience with private sector skills to craft strategic solutions for the most pressing issues in the country today.