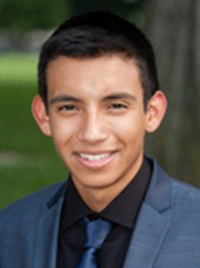 June 2014 Junior Alumnus of the Month

Later this month, high school senior Cameren Ceniceros will bid adieu to Bloomington High School and prepare for an exciting four year journey at The University of California, San Diego. This incoming college freshman has a lot to celebrate in preparation for the fall, including the financial support that he has earned to aid his undergraduate expenses.

Cameren is the recipient of two prestigious scholarship awards including the Naval Reserve Officers Training Corps Scholarship (NROTC), which will significantly cover expenses at UC San Diego up to $180,000; and the Joseph Gilliam Award, which is offered to one ROTC cadet in the Southern California and Arizona regions. Both awards combined give Cameren the opportunity to attend and graduate from college without burdening his family.

As the eldest of three, Cameren takes his responsibility as big brother to shepherd his siblings seriously. His goal is to help them also strive for excellence by serving as a role model. This is why he has reached above and beyond in school and through service. For instance, Cameren will graduate from high school with a 4.6 GPA, having taken rigorous advanced placement and honors courses. Additionally, he has pursued various leadership roles in NJROTC at his high school, including Platoon Leader and Executive Officer.

Cameren aspires to graduate from UC San Diego with a degree in mechanical engineering and a minor in political science. Additionally, he is eager to fulfill a life-long dream of serving in the military. With the support of his National Navy ROTC scholarship, Cameren will be able to serve a minimum of four years in the Navy upon graduation and will enter as an officer.

After his participation in R2L NextGen, Cameren walked away inspired to continue his academic and leadership journey. “I came home more determined and motivated than ever to be successful and defy statistics,” shared Cameren. One of the most impactful activities during the week-long program was meeting the CHCI interns. “Connecting with CHCI’s interns was incredible because it was as if I was seeing a reflection of myself in the future, the future me in college and beyond,” explained Cameren.

CHCI congratulates Cameren on receiving multiple scholarships and for his acceptance into the University of California, San Diego. CHCI is proud to have Cameren Ceniceros as part of the CHCI familia!