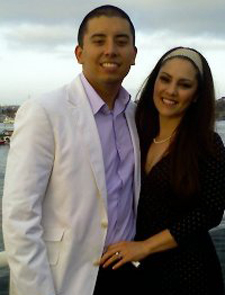 In June of 2006, we married in Malibu, California, soon after our CHCI graduation. We lived in Los Angeles for a few months before deciding to move to Santa Fe, New Mexico, where we bought our first home. Christiana worked for the NM Attorney General’s Office up until December 2009, when she accepted a Public Relations position with the NM Secretary of State. Christian was hired as a Budget Analyst with the NM State Legislative Finance Committee, and has held this position since moving to New Mexico in 2006. He is also working on his MBA with an expected graduation date of August 2010. In 2010 they plan on either starting a family or buying a bulldog — to be decided on after the June primary election.

As CHCI Fellows we were taught the importance of leadership, education, and advocating for the issues facing Latinos in the United States. Through our fellowship, we were able to attain and hone skills necessary to become better leaders and public servants.

3. How do you manage family, careers, and community service?

We try not to put too much pressure on each other since our careers in conjunction with graduate school, community advocacy, and political activities can be very demanding. We understand that on occasion, one has to pick up the slack for the other. We have learned that marriage is not necessarily a 50/50 partnership as some like to think. Sometimes, it’s 90/10 partnership, depending on the day. At the end of the day, it’s all worth it.