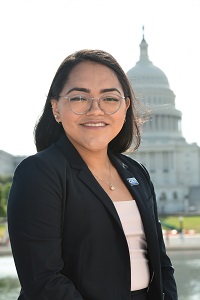 Cinthia was born in Santa Cruz de Yojoa, Honduras. In 2005, she and her family migrated to the US in hopes of securing a better future. Once in the US, the importance of education was stressed for the Zavala-Ramos children. Cinthia, as the oldest, became the first to graduate from any type of schooling and attend college. Since starting college, Cinthia has been involved in various clubs. She serves as Co-President of the activist student group MEChA, as a clinical volunteer at HAVEN Free Clinic (a clinic that provides free healthcare to uninsured immigrants), and as an undergraduate researcher at in the Breaker Lab at Yale. Cinthia continually tries to combine her love for health and biology with her preoccupation with immigration and its implications.

Cinthia is currently a Junior at Yale University, pursuing a double major in Molecular, Cellular and Developmental Biology (MCDB) and Ethnicity, Race, and Migration (ER&M). In ER&M, she is concentrating in Health, Gender and Central American Migration Studies. Upon completing her undergraduate degrees, Cinthia hopes to obtain a J.D. and become an attorney. Her ultimate goal would be to practice in a sector of law that focuses on immigrant rights and healthcare.

As a CHCI intern, Cinthia hopes to familiarize herself with the inner networks and webs of the US government. She would like to see how immigration, a personal and immediate issue to her, is dealt with at the macro level in the federal legislature.