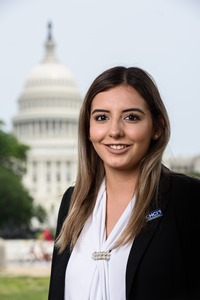 Clarissa Rojas is a second-generation Mexican-American born in El Paso, Texas and raised in Los Angeles, California. She is the proud daughter of a Mexican immigrant single mother who serves as her biggest inspiration in life. She hopes to one day give back to her mother for all the sacrifices she has made for her and her sibling.

She is currently a graduating senior at California State University, Northridge (CSUN) where she is majoring in Journalism and minoring in Political Science. As a journalism major, she has had the opportunity to serve as a reporter for “En Otras Palabras,” a Spanish language newscast dedicated to highlighting key issues within the Latino community in the United States. Rojas is passionate about politics and hopes to take her experience in both journalism and government to pursue a career as a Press Secretary or Communications Director in a political office.

Rojas was the Chief of Staff for Associated Students at CSUN and a former Senator for the College of Arts, Media, and Communication, where she wrote and passed campus legislation affecting 40,000 students. During her time in student government, she had the opportunity to advocate for her peers on a local, state, and federal level.  As a CHCI Intern, she hopes to gain firsthand experience on the legislative process and how media strategies are administered on Capitol Hill.