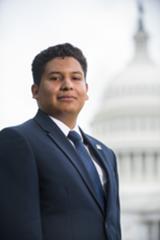 Cristian Aguina is a young college student from Las Vegas, Nevada. Cristian was born in Santa Maria Del Oro, Durango, Mexico and was brought to the United States at the age of two. His family was seeking a brighter future for him and his sister. He grew up in very impoverished situation where his family of four lived in a one bedroom studio for most of his high school years. At times, there was no money, but that never stopped him from continuing his dreams of one day becoming an investment banker.

Cristian is currently a sophomore completing his associate’s degree in business at the College of Southern Nevada and intends on pursuing a bachelor’s in finance. Once he graduates with his bachelor’s degree, Cristian hopes to become an investment banker and help other young students that have gone through the same struggles. He also hopes to create a mentorship program, which would mentor underprivileged kids so they too can be equipped with the proper tools to become successful.

As a CHCI Intern, Cristian hopes to grow his networking skills and gain a deeper understanding of our government.