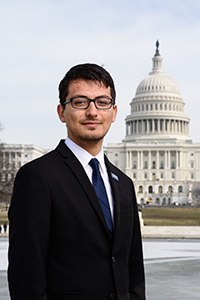 Daniel Estupiñan is a visionary leader in New Mexico’s public education system. Born in El Paso, Texas, he grew up in Sunland Park, New Mexico. Following graduation from high school, Daniel launched his first political campaign, and was elected to a seat upon his local school board. As the youngest school board member in New Mexico, Daniel has focused on ensuring each of the 14,200 students in his school district have access to technology within their classrooms. At the same time, Daniel served on the governing body of his local community college, where he worked to create greater academic collaboration between the college, the three local school districts, and the local university.

With the support of the Gates Millennium Scholars Program, Daniel is working toward earning a BA in Finance with a minor in Government at New Mexico State University. Daniel has served on the Collegiate Advisory Board of the Federal Reserve Bank of Dallas, El Paso Branch where he completed an industry report evaluating the economic impact, and funding inequities, within public education in New Mexico and Texas. In addition, Daniel also served as a Pete V. Domenici Public Policy Scholar, where he drafted a white paper evaluating the role of Hispanic Serving Institutions in expanding access to higher education among Hispanic students.

In the future, Daniel plans to pursue an MPP and work toward improving the quality of public education within Hispanic communities. As a CHCI intern, his goal is to learn more about the legislative process and enhance his ability to advocate for greater equity in public education.