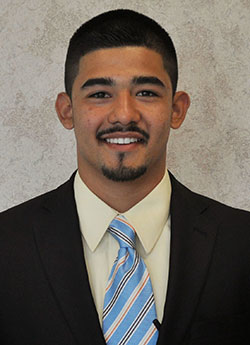 Daniel Garza was born in Durango, Mexico. His family migrated to eastern North Carolina with a work visa in 1998 in order to offer him a better life full of opportunities. Daniel and his brother have been raised by a single mother since 2000. His drive to overcome and never give up has inspired Daniel to persevere and take advantage of the opportunity he was given. At the age 16, Daniel was discouraged because his citizenship status hindered him from applying for his license, college, and even a job. When the Deferred Action for Childhood Arrivals (DACA) act was passed Daniel immediately applied because he would not let this opportunity go.

Academics have always been a priority for Daniel and after receiving DACA, he found himself even more focused. Daniel enrolled in the Early College program where he had the chance to take college level courses throughout his high school career, and graduated high school with a 4.0 GPA. He was a very involved student and joined many clubs, including National Beta Club, Juntos (Hispanic Activist Club), Teens Against Gangs, Fellowship of Christian Athletes, and Men of Success (minority male mentoring). In addition to clubs, every season he was involved in whatever sport was offered, whether it was football, cheerleading, basketball, or baseball.

Always ambitious, Daniel became the captain of his football team, president of the Juntos club, and a mentor in a minority male mentoring club. He discovered his leadership potential when he was nominated for several leadership conferences like the Hugh O’Brian conference, UNC Project Uplift, and Student Athlete Summer Institute.

After graduating, he applied to Beaufort County Community College and finished his associate’s degree. He served as a Student Ambassador at his community college, which paid for his tuition. While pursuing his associate’s degree, Daniel spent a year as a Latino outreach and education intern with North Carolina Coastal Federation, a non-profit environmentalist group. Daniel implemented several projects with local Latino organizations where he emphasized the importance of stewardship and conserving our coast, installing rain barrels for local businesses and leading Adopt-A-Highway efforts.

After graduating from Beaufort County Community College, Daniel transferred to Campbell University where he is pursuing a bachelor’s in communications majoring in public relations. Daniel became involved immediately and joined a Campus Ministry group, though which he attends weekly bible study and went on his first mission trip to South Florida. This experience changed his life and allowed him to grow spiritually like never before. He also joined Campbell Hispanic Association and intramural sports teams, and earned a place on the Dean’s List for his academic achievement. Having a younger brother, Daniel has to live life knowing someone is looking up to him.

Being a first generation college student Daniel has overcome great odds. Along the way he has learned to never give up, stay humble, and to trust in God. He recently gave a speech at Campbell during an assembly where he spoke about conflict. He explained his story and how he has encountered and dealt with conflict. He hopes to be a motivational speaker one day to pass down his wisdom to the generations behind him. His dream is to start a leadership conference that can spark motivation in students so that they can use their efforts for the greater good.