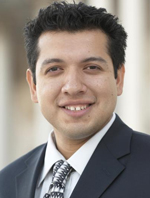 Danny was born in Los Angeles, and raised in the San Fernando/Pacoima area with his four brothers. While in high school, he served as President for Richard Alarcón’s Young Senators Program. Danny attended Stanford University where he majored in Political Science and double-minored in Music and Cultural & Social Anthropology. While at Stanford, he staffed the university’s Latino dorm, Casa Zapata. Danny also tutored elementary school students with Barrio Assistance and organized cultural events as Program Coordinator for El Centro Chicano. His sophomore summer, Danny helped the City of San Fernando plan and build its Cesar E. Chavez Memorial. In 2006, his work for the greater Stanford Latino community was recognized and was awarded the James W. Lyons Award for Service.

Danny’s second love is music. After picking up the violin at 9 years old, he joined his first professional mariachi ensemble at the age of 15. At Stanford, he served as musical director of Mariachi Cardenal de Stanford for three years. Currently, Danny tours occasionally with several professional ensembles.

As a Congressional Hispanic Caucus Institute Public Policy Fellow, Danny hopes to become involved in the public discourse on immigration, civil rights, and healthcare, ensuring that a Latino perspective is being taken into consideration. In the distant future, he hopes to one day combine his two loves and work to secure public and private funding for the arts.