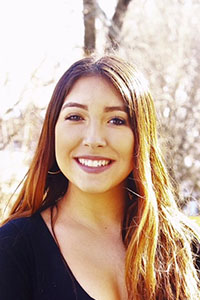 Daniela was born and raised in Westchester County, New York by her mother and father who immigrated to the United States from Mexico. As the first person in her family to attend college, Daniela hopes to attend law school someday and work to increase the representation of Latina women in law and politics as a whole.

On-campus, she serves as the Secretary of Dreamers on Grounds, a student organization that advocates for the rights of undocumented students and undocumented folks in the local community. She is also the Secretary for Planned Parenthood Generation Action, an organization that advocates for greater accessibility of reproductive healthcare on campus and the Women’s Center’s Men’s Leadership Project Intern, which is a mentoring program that focuses on the promotion of healthy masculinity.

Daniela is a rising fourth year at the University of Virginia, where she double majors in Political Philosophy, Policy & Law (PPL), and Foreign Affairs. Getting into PPL, which is a small, interdisciplinary Distinguished Major, has been her greatest achievement thus far in college. During her final year, she looks forward to writing her thesis on the topic of educational inequity. Upon completing her undergraduate studies, Daniela hopes to study immigration or civil rights law.

As a CHCI participant, Daniela hopes to learn more about legislative processes and how legislators work to meet and engage with constituent needs. She hopes to be able to use this experience to inspire other Latinx, first-gen women in her community to pursue their dreams and career goals!