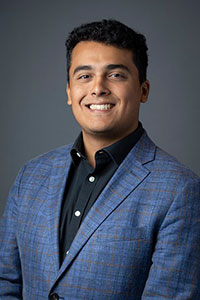 David was raised in Houston, Texas, by his mother and father, who both immigrated to the United States from Mexico at an early age. His mother, mentors, and EMERGE, a Houston-based first college access program, helped to cultivate a desire within him to help low-
income/minority communities that often experience injustices and inequality.

David graduated from Columbia University with a degree in chemical engineering, focusing on renewable energy and energy storage. He discovered his passion for alternative energy/fuels and storage through his technical electives and research experience at the Electrochemical Engineering Lab, where he focused on the optimization/characterization of cell storage efficiency in vanadium redox flow batteries and co-authored a publication in the Journal of the Electrochemical Society. During his college experience, he landed an internship at CHCI, which allowed him to explore the role of policy in advancing the energy marketplace. David then became the President of Sci-Inspire, a STEM outreach group on his college campus that paired volunteers to teach and mentor students in underserved communities in the New York area.

As a CHCI Public Policy Fellow, David hopes to develop his understanding of the legislative process further to help the world transition to renewable energy sources, be equipped to tackle the climate crisis and help reduce inequality experienced by members of the undocumented and underserved communities.