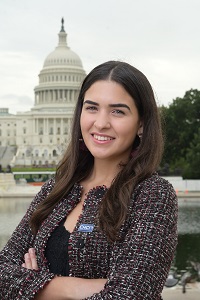 Dessiree was born in Havana, Cuba and migrated to the U.S. when she was seven years old. From an early age, Dessiree learned to develop a studious work ethic thanks to the effort her mother poured into her education. As one of the first members of her family to attend university, Dessiree understands the value of pursuing higher education and engaging in community service.

Dessiree is currently a Junior double majoring in Political Science and International Relations at Florida International University. Within her coursework, Dessiree has developed a focus on Latin American politics and foreign policy. Apart from her studies, she served as head Delegate for FIU’s top-ranked Model United Nations Program which included attending highly competitive speech, policy, and debate conferences on a monthly basis. During her Sophomore year, she worked as a teacher for Bricks4Kidz, an enrichment program centered on teaching children STEM through the use of Legos. Dessiree has always endeavored to be an active member of her community and challenge herself academically. After completing her studies, Dessiree plans on pursuing a career in the U.S Foreign Service, and eventually attending law school. Ideally, Dessiree hopes to advance human rights within Latin America and work with the U.S. Department of State to help developing economies across the world.

As a CHCI intern, Dessiree hopes to improve her skills in government communications and gain insight on U.S. legislative procedure. She hopes this experience will help her grow intellectually and strengthen her abilities to service her community.