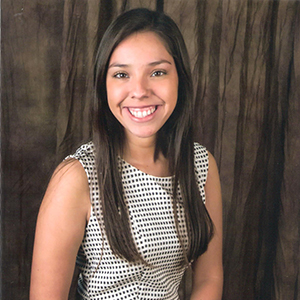 Diana Valenzuela comes from McFarland, a small town in central California, where she grew up as part of a humble, hard-working migrant family. She knew from an early age that all of her parent’s daily struggles in the field were meant to provide her with better opportunities. This has served as her motivation to continue with her educational career.

One summer, as a teenager, Diana worked the fields with her parents. During that summer, temperatures surpassed 100 degrees, and the humidity under the grapevines was suffocating; but yet she continued working. That summer, she also learned how all this hard work had wages that made it very difficult for people (including her family) to make enough for a decent living. Since that day she has strived to excel in school, and she is now transformed into a well-rounded, studious young lady that is building a successful future for her and her family.

Diana currently attends the University of Southern California (USC), where she’s pursuing a major in industrial & systems engineering. She is a member of the Society of Hispanic Professional Engineers (SHPE) and part of the Community Outreach Committee, where she helps organize STEM related events for K-12 schools in low-income communities in the Los Angeles area. Diana feels proud to be able to give back to the community by serving as a resource to these underprivileged schools.

Growing up, she knew that higher education was the path towards a success. However, she never actually knew what to expect from college or what students went through. Now, each time that the committee hosts an event, she feels excited to give the students a tour of the USC campus and share with them her experiences as a student in the hopes of enhancing their understanding of what academic life entails.

Towards the end of her sophomore year, she began searching for internships within the Bakersfield and Delano area. She contacted Lucich Farms, the table grape grower that her parents work for, and they were happy to take her in as an intern. She is currently in the Human Resource & Food Safety Department. At her internship she has supported a food safety audit for the company and now she has been preparing for a social audit that is coming up soon. As her summer vacation comes to an end, she is thrilled to approach her third year at USC.

Diana is honored to be a CHCI Scholar. CHCI has made it possible for her to continue with her educational career and she appreciates all the support that we have given her. She promises to continue working hard and continue to prove that she is a worthy CHCI Scholar.