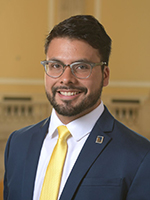 Diego Quiñones was born in Guadalajara, Jalisco in Mexico and lived there until he was seven years old. He moved with his family to Bentonville, Arkansas in 1997. He is the son of two Mexican nationals who own a small business. Being raised in a low-income family Diego learned to take advantage of every opportunity and developed excellent work ethic because of the economic situation his family endured upon their arrival to the United States. Diego is the first person in his family to graduate from an institution of higher education. He graduated from the University of Arkansas in 2016, where he studied history, political science, and Latin American studies.

During his undergraduate career, Diego focused his academic research on the benefits of having a more highly educated and specialized Latino base, the failure of the “War on Drugs,” and on the Arab-Israeli Conflict. Outside the classroom he saw the marginalization of the Latino community in the state of Arkansas and through an internship helped combat this inequality. As an intern he advocated for immigration reform and helped organized protests against negative and false portrayals of the Latino community.

As a CHCI Public Policy Fellow, Diego hopes to work with Congressional leaders in order to gain a deeper understanding of the legislative process, in turn this can lead to the development of public policies that are beneficial to everyone.