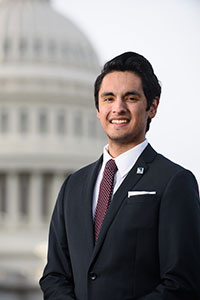 Dominic Hayden Ochoa is a first generation college student, born and raised in San Antonio, Texas. As a student at James Madison High School, Dominic’s parents encouraged him to get involved in STEM, and prioritize his academics. During his time there, he was a member of a program of students who designed and built solar powered race cars to compete against other high schools from across the nation. In total, he was involved in the development of 4 solar powered vehicles.

Inspired by his high school experiences, Dominic chose to pursue mechanical engineering at San Antonio College where he earned his associates degree this past year. As a student at San Antonio College, Dominic participated in programs that helped promote STEM to Latinos and other underrepresented minorities on campus. As vice-president of the student chapter of Latinos in Science and Engineering (MAES) he helped organize and volunteer at campus events such as the San Antonio Hispanic Chamber of Commerce Core4STEM. Dominic also was the founder and project manager of San Antonio College Motorsport, a team of students and faculty that designed and built a hydrogen powered prototype car that earned 3rd place in the Shell Eco Marathon Americas competition in Detroit, Michigan.

In the summer of 2016, Dominic experienced his first college internship with NASA’s Glenn Research Center in Cleveland, Ohio. As an intern, Dominic worked in the Fluids and Cryogenic Systems department where he learned how valuable knowledge of the policy-making process can be to NASA engineers. His experience at NASA motivated him to become a CHCI intern.