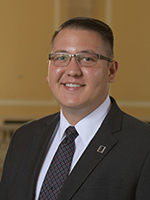 Dustin is a native of Albuquerque, New Mexico. He attended New Mexico State University (NMSU), where he obtained a Bachelor of Accountancy and a Bachelor of Business Administration – Finance.

Off campus, Dustin has gained insight into the workings of the federal government and associated agencies while interning with the Office of Senator Martin Heinrich. In addition he has also served his community on local and statewide program oversight boards in New Mexico.

As a CHCI Public Policy Fellow, Dustin hopes to gain additional skills to better serve the Latino community. In the future, he plans to attend law school and will use his education and experiences to further serve his community.