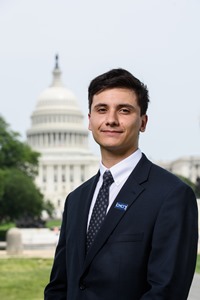 Eduardo Rubio was born in Guadalajara, Mexico. When his younger brother was diagnosed with Autism, his family immigrated to the United States to provide his brother better opportunities. Seeing his younger brother and watching the sacrifices and hardships his parents faced as he grew up drives Eduardo to help both the special needs and immigrant communities.

Eduardo is currently a rising Junior studying Computational Science and Economics at Mercer University in Macon, GA. Eduardo has participated in activism related to immigration reform at the local and national level, appearing on television news broadcasts, speaking at rallies and serving as a panelist at academic events. He traveled to Washington, D.C. with FWD.us to discuss immigration policy and the DREAM Act with members of Congress, and helped organize the eighth annual Collegiate Alliance for Immigration Reform (CAIR) Conference at Harvard University in February 2018.

At Mercer, Eduardo serves as a peer advisor for the incoming freshmen students. He is also a co-founder, treasurer and vice president of operations for the Mercer chapter of One in Four, an organization dedicated to preventing sexual assault.

As a member of the University’s debate team, he won first place in the novice division and fifth place top speaker at the Georgia B. Bowman Invitational hosted by William Jewell University in Liberty, Missouri, last September. Eduardo is also a member of the Mercer Leadership 2017 cohort and assists students with developing professional skills as a career service associate with the Center for Career and Professional Development.