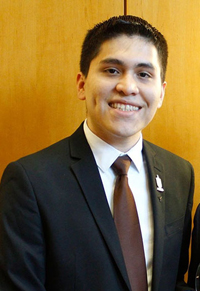 School: The University of Texas at Austin

Edwin Hurtado graduated from James Pace High School in Brownsville, Texas. While in high school, he was involved in many extracurricular activities including National Honor Society, SkillsUSA, theTechnology Student Association, and Science Fair. During his senior year, Edwin qualified for Intel’s International Science and Engineering Fair, where he competed with students from over 70 countries.

Edwin is currently in his third year at The University of Texas at Austin working towards a B.A. in Government. After graduation, Edwin plans to enroll in law school in order to become an attorney and eventually pursue a career in politics to help marginalized and underrepresented communities.

Edwin gained professional experience by interning in the Texas House of Representatives during the 83rd and 84th Legislature, as well as in the Office of the Governor. During his time in the political field, he noticed that several Latino issues were not being appropriately addressed. This led him to become more involved on campus with the Latino community. He started by joining student organizations including the Hispanic Scholarship Fund Scholar Chapter, which hosts outreach events at local high schools to motivate and empower students to pursue a degree in higher education, and Latino Community Affairs, a student organization that addresses community issues through meetings with campus staff and student representatives and hosting events that inform and engage the student body. More recently, he also became a brother of Lambda Theta Phi Latin Fraternity, joining because of the great value they place on culture and their dedication to helping the Latino community.

During the 2014-2015 school year, Edwin served as the Chair of the Latino Leadership Summit for the Latino Community Affairs agency. The goal of the Latino Leadership Summit is to give students leadership opportunities to collaborate and discuss the many challenges faced by our communities. As Chair of the Latino Leadership Summit, Edwin was tasked with all the logistics of putting the event together as a way to motivate/empower the attendees to become involved in their communities. Thanks to his efforts, he was able to secure keynote participation from prominent Texas Latinos such as Rep. Joaquin Castro, State Representative Mary E. González and motivational speaker Raul Magdaleno. The workshop presentations were led by Latinos from Texas in the fields of academia, media, technology, business, law, and non-profits. Edwin is happy to share that this event was a huge success, with participation of students from nine different colleges and high schools from all over Texas. Participants were able to gain a deeper understanding of issues facing the Latino community as well as how they can act to solve them.