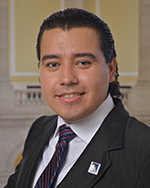 Elias was born in San Salvador, El Salvador. As a teenager, he permanently immigrated to Silver Spring, MD to reunite with his parents. Coming from a low-income working family facing day-to-day challenges, he learned English and was the first in his family to earn a college degree. Elias is a 2013 graduate of Towson University, where he studies international studies and anthropology.

During his undergraduate career, he gained great insight of critical issues affecting historically marginalized communities. His humble upbringing did not only provide him with first-hand experience on these issues, but it also gave him an incentive to advocate on campus for ideals close to home, such as immigration reform and creating awareness around human-induced environmental degradation.

Elias has worked for the Labor Council for Latin American Advancement (LCLAA), a constituency group of the AFL-CIO, which represents the interests of approximately two million Latino trade unionists in the United States and Puerto Rico. Through his work at LCLAA, he has gained extensive experience within the labor movement and a strong understanding of the role of unions, community education, and issue-based engagement for working Latino families. His work at LCLAA has helped him learn the importance of civic participation on the local, state, and federal levels for the social, political, and economic advancement of low-income and racial/ethnic minorities.

As a CHCI Public Policy Fellow, he hopes to gain a greater understanding of the legislative process and its impact on the Latino community, as well as ways in which to encourage Latino families to be proactive in human rights discourse at a domestic and global scale.