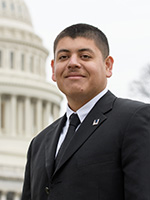 Eliel Aguillon Cazares is an undocumented first-generation college student born in Guerrero, Mexico. When Eliel was seven years old, he and his family immigrated to California with the hope of a better future. Despite growing up in a community with high levels of poverty and violence, Eliel never stopped seeking opportunities to advance himself.

Eliel is a currently sophomore at Santa Ana College majoring in civil engineering, and is expected to attend the University of Alaska Fairbanks this fall. He remains involved on campus through organizations such as the Society of Hispanic Professional Engineers (SHPE) and the Engineering Club. Eliel works to encourage young Latinos to pursue careers in STEM and increase Latino representation in the field of engineering.

As a CHCI Intern, Eliel hopes to strengthen his leadership and networking skills. In the future, Eliel plans to pursue a master’s degree and Ph.D. in civil engineering. He hopes to conduct research and develop low-cost housing options for not only developing countries, but also for his hometown of Guerrero, Mexico, and his local community in the United States.