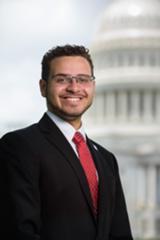 Elio Velazquez was born to a single, teenage Puerto Rican mother in New York and raised predominantly in South Bronx. He struggled to overcome homelessness in a more affluent neighborhood that hindered his education and shaped his passion for public policy. By becoming a representative for his Latino community, he hopes to lessen the adversities that plague lower income families.

Elio is a junior at Marist College studying business administration with an emphasis in international business and minoring in philosophy, economics, and global studies. On campus, he was a part of the Presidential Board for the Student Government Association, where he served as the Vice President of Civic Engagement to encourage students to help the community. He was recognized as one of the top 100 most inspirational students on campus, and has been featured in the New York Times Magazine, ABC news, a documentary film, and The Washington Post.

Last summer, Elio was invited to speak at the nation’s capital at a congressional briefing to provide insight and recommendations regarding education and homeless youth. His efforts to improve the public education system in his community have allowed him to meet with the U.S. Secretary of Education, John King, to influence several national educational policies.

As a CHCI Intern, Elio hopes to learn more about Congress and ways in which he can better his community and increase its socio-economic competitiveness. After graduating from Marist College, Elio looks to pursue law school to establish better support programs and public policies oriented to the needs of his community.