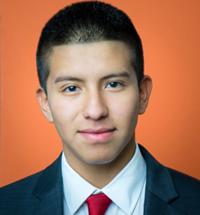 Erick Alonzo is a junior enrolled at John Jay College, a Hispanic Serving Institution at the City University of New York (CUNY). He is studying international security and political economy, two subfields of international relations. He participated in Student Council as one of four Freshmen Representatives. In that role, he collaborated with other student leaders to create events aimed at fostering an inclusive atmosphere for the college community. One of his highlights in this position was leading the planning and execution of an event focused on resilience and public service. As part of the Urban Male Initiative at John Jay College, he assisted in collecting over three hundred voter registration forms of newly eligible minority voters in anticipation of the New York State general and local elections of 2013.

His early service and strong academic record opened the doors to a variety of opportunities including the John Jay College Honors Program; America Needs You Fellowship; the Harvard Kennedy School Public Policy and Leadership Conference; and the CUNY Service Corps. As a Service Corps member, Erick was recruited by the New York City Council to work on the Participatory Budgeting Project, an initiative aimed to foster inclusion and economic democracy by allowing constituents to propose ideas and vote on how public funds should be spent in their neighborhoods. Erick was the first Service Corps member to work in the Council’s Fifteenth District, a very diverse and economically challenged district in Northwest Bronx. Along with district representatives, he conducted community outreach in order to increase awareness on the project and find ways ordinary residents could become involved. Erick canvassed throughout housing projects, basketball courts, parks, senior centers and other community dwellings to increase participation and turnout.

As Erick helped organize Bronx neighborhoods during the night, he observed that the same indifference towards voting in official elections was also prevalent towards micro-level participation. This experience inspired his paper written on the relationship between the lack of political efficacy and the dominance of big money in politics. He had the honor of having his research published in the thirtieth volume of John Jay’s Finest, an annual publication of the best student writing.

After his sophomore year, he devoted his summer to the Platoon Leaders Course at Marine Corps Officer Candidate School, as well as the Research Mentoring Fellowship with the Office of Undergraduate Research at John Jay College, where he looked at the territorial expansion of drug-trafficking organizations in Latin America. Erick hopes to earn his Ph.D. in political science and contribute to the field of political violence research, particularly the relationship between the lack of political and economic opportunities and the emergence of security challenges.