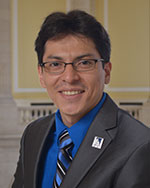 Ernesto’s commitment to public policy and international affairs stems from his youth, when he witnessed his parents and sister’s involvement – empowering, educating, and caring for those who needed the most in rural and indigenous areas in his native Ecuador. His family planted a seed of service in his heart and a spirit of commitment for global responsiveness through the rest of his life.

During his time at New Jersey City University, Ernesto became involved as a student senator, a student ambassador, a peer mentor, and President of the National Society of Leadership and Success. He has remained involved in his community as a New Jersey Governor’s Hispanic Fellow and the Institute of Latin American Art & Culture. Ernesto has also interned with the Ecuadorian Permanent Mission to the United Nations, where he became passionate about peacekeeping operations, humanitarian and development programs in the United Nations, and the role of a civil society in the world. Ernesto was also selected to be part of the 2014 New American Leaders Project, which was key in establishing his interest in public policy and public service.

As a CHCI Fellow, he plans to enhance his understanding of social responsibility, sustainable policy-making, and human rights advocacy. He looks forward to contributing to a more cognizant political and global community, and inspiring others to be catalysts of change.