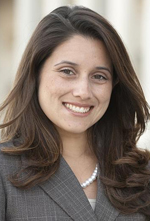 As a CHCI Public Policy Graduate Fellow with the House Financial Services Committee, Esther analyzed current and proposed policies pertaining to federal housing and community development legislation. As a result of her findings, Esther drafted policy recommendations to the Committee’s senior staff. Esther was the first CHCI fellow to ever be placed with a House Committee.

During her second placement with NeighborWorks America, Esther assists the Senior Advisor of Gulf Rebuilding and Green Strategies with the development and implementation of the corporation’s green initiative. She is currently compiling statistics from ongoing best green practices from across the nation. Her additional duties include assisting staff in drafting seven grant programs for the initiative and providing information for the public web site and internal database.

Esther was born in Anaheim, California and raised in Las Vegas, Nevada. In June of 2005, Esther graduated with a B.A. in Economics and a minor in Criminal Justice from the University of Nevada, Las Vegas. While at UNLV Esther spent most of her time involved in extracurricular activities such as MEChA, Kappa Delta Chi Sorority, Latino Graduation Committee, and Ethnic Student Council. Additionally, Esther invested much of her time volunteering in her local community for organizations including Habitat for Humanity, Susan G. Komen Breast Cancer Awareness Walk, Disability Awareness Month, and tutoring pre-school children. She also spent time traveling around Europe as a study-abroad student in Pau, France.

With the ambition to give back to her community and provide a better future for her family, Esther recently earned a Masters of City and Regional Planning with distinct honors from California Polytechnic State University, San Luis Obispo, CA. Esther wrote her master’s thesis on sense of community in low-income multi-family housing. Her study shed light on the importance of community involvement throughout the housing development process for low-income residents. She presented her thesis at the Environmental Design Research Association National Conference. Additionally, she received a grant from the US Department of Housing and Urban Development which gave her the opportunity to intern at various municipal jurisdictions while in school. As a first generation Mexican-American, Esther understands the importance of advocating for the marginalized, especially when considering the lack of adequate housing and communities.

Following her CHCI Public Policy Graduate Fellowship, Esther hopes to pursue a Ph.D. in Policy, Planning, and Community Development. During Esther’s spare time she likes to run, eat, travel and shop for shoes.