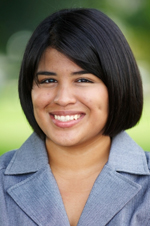 School: University of Texas at Austin

Placement 1: The White House, Office of the Vice President

Evelia was raised in the Rio Grande Valley in McAllen, Texas. She graduated from the University of Texas at Austin (UT) with a Bachelor of Arts in Government. At UT, Evelia earned University Honors and was recognized as a College Scholar in 2006 and 2007. She was also a member of the UT Foreign Policy Council and Pi Sigma Alpha Honor Society.

Last fall, Evelia worked for the State Department at the U.S. Embassy in Ankara, Turkey. She conducted research on gender-based violence issues, briefed U.S. officials on Turkish current events, and organized a video conference attended by women and human rights activists in both Washington, D.C. and Ankara. While in Turkey, Evelia launched an in-kind donation drive for the Van Dernegi Women’s Shelter in southeastern Turkey.

As a Public Policy Fellow, Evelia would like to learn more about international affairs, how federal policy is devised, and women’s issues at the national level. In the future, Evelia hopes to attend graduate school and join the Peace Corps. Her interests include reading, watching movies, and spending time with family and friends.